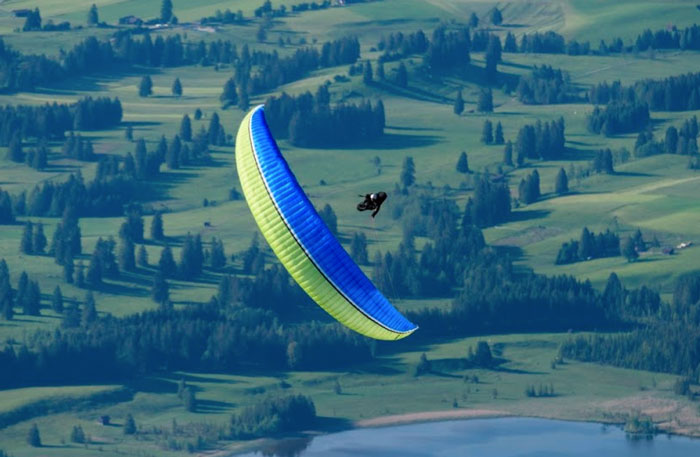 UP’s commercial “angel”, Annalena, handed me the UP Trango XC3-S in Slovenia. “Take it for a spin. Enjoy it, it flies fast!”, she said with a smile. Later on that week to prove her point, Annalena went on to win the German Open on the very same glider.

Having never flown the Trango XC2, I could only admire it from a distance; the sleek and superior appearance, the way it sat at the top of the gaggle stacks at competitions, and the performance… I couldn’t wait to fly this new XC3 version in familiar territory.

What the manufacters says

UP go as far back as 1970, when Pete Brock, designing engineer of the most legendary race car in history, the Daytona, turned his interests towards the emerging sport of hang-gliding and so founded Ultralite Product, introducing his first wing, the Dragonfly, under the acronym of UP. The rest is paragliding history but it goes to say that UP have been around for a very long time. Now based in Garmisch, UP’s chief designer Frantisek Pavlousek (previously with Axis) is at the helm of UP’s designer success, and with his hallmark already stamped all over the XC2, has come up trumps once again with the Trango XC3.

How does a company improve on an already high performance cross-country wing such as the Trango XC2? To produce even greater results, the research and development team have optimised every aspect of the XC2 to bring you a new generation aerofoil.

Those in search of more speed are going to get it, but one of the most significant features of this newer version is not only the speed, but the performance too. This has increased significantly, primarily due to the design and shape which seems to convert turbulence into altitude more efficiently than its predecessor.

UP say: “Building the replacement for a very popular wing is in some respects a thankless endeavour. On the one hand you can be fairly certain that it will be a success, on the other hand there is a good chance that finding things to actually improve is going to be really hard”.

The new Trango XC3 is many things, but it is first and foremost a more stable, faster wing, built to race even when there is no one to race against.

Presented in a very “neat” compression bag, the glider folds into an elongated rectangle. This is because of the batten structure of the canopy which has reinforcements on the leading edge, and a second set in line with the C-lines to support the tension in the trailing edge. UP say this derives from the 2-liner technology, hence the bespoke concertina bag. However, the glider can be folded into any configuration, as long as the “stepped”* method is respected. (*When the shorter cells are folded to the middle and the longer cells reach the top of the bag). The “ParaSleeve” packing bag itself is very well designed with an adjustable strap and buckle on either side 2/3rds of the way down, and handles for ease of carrying. I liked this feature, particularly as the glider is light, coming in at just 4.5kg for the S size.

UP have used 3-D panel shaping and opted for Porcher Skytex 38g on areas of high friction on the front and upper surface. The entire under surface is made with Skytex 27g Classic. The diagonals and mini ribs are a combination of 32g and 27g Hard Finish, also from Porcher.

When laid out on the ground, the glider’s rigid shark nose is most prominent. Sixty-eight cells contribute to its aerodynamic design and characterise the overall shape of the wing, as well as enhancing the recognisable sweptback wing-tips, making the overall appearance sleek and sexy.

The battens in the glider’s leading edge and additional nylon battens towards the trailing edge are a direct inheritance from the 2-liner prototype designs; the top battens being used to shape the leading edge and distribute the load from the A and B-lines, whilst the shorter battens above the C-lines also distribute the loading but also maintain the rear section of the top surface.

On the bar, the glider feels light and efficient and there is a distinct improvement with stability when at top speed compared to the XC2. The speed system on the risers of the XC3 has a small plastic ball attached to it, which enables an additional first and second gear on the accelerator; thus when initiating the speed bar the effort required is less. When pushing more bar, the ball reaches the bottom pulley and blocks against it, therefore reducing the travel by half and making the transition to full bar smooth and effortless.

The Trango XC3 is a 3-liner with 2-liner technology. Its A, B and C lines are made from unsheathed Dyneema and Aramid. Compared to the XC2, the overall line length of the Trango XC3 has been reduced by 7m. Attachment tab points on the canopy have been specifically placed on the leading edge in a set-back position for low drag effect.

The new risers are slimmer and more aerodynamic, with the split A and B risers colour coded to make ground handling and pulling Big Ears more accessible. The riser lengths, although shorter on the (S) and (SM) sizes, have been adapted to the canopy size which improves the ergonomics of the wing. However, there is no rear riser control mechanism in the form of T-bars, balls or handles. At first I was surprised and perhaps a little disappointed, as the XC2 did indeed have ball handles on the C-risers. However I soon realised in flight, that the rear-riser steering feature just isn’t necessary because of the elaborate speed system applying direct pressure to both the A’s and B’s simultaneously, therefore reducing pitch during accelerated flight.

The brake travel is shorter which allows for precision feedback from the wing without feeling heavy. This was one of the points important to its remaining certified in the EN-C category. The brake handles have wide straps which are more comfortable, particularly for smaller hands.

The high-quality pulleys are sleek in design and contribute to the user-friendliness of the bar, encouraging the pilot to use the accelerator.
As mentioned before, there are no rear-riser steering mechanisms but UP have opted not to use swivels on the brake ends, saying that the 50mm saved improves the precision handling for greater harmony between the glider and pilot.

Despite its high aspect ration, ground handling the XC3 was less of a handful than I’d expected. In addition the majority of lightweight gliders need more piloting because of the lighter materials used for the canopy. Preparing the wing for pre-inflation was however effortless in a stronger breeze; the cells filled instantaneously enabling the pilot to build a symmetric wall and prevent the tips from producing small cravats.
Forward launching the XC3 was a simple affair. The glider inflates easily in nil wind using the middle A’s and comes up symmetrically without overshooting.
Reverse launching in strong thermic conditions was surprisingly smooth having prepared the glider by pre-inflating before lifting it. Using only the middle A’s again, the glider came up slowly and symmetrically, without snatching and hovered steadily above my head. I have to say that my launching techniques are far from perfect, and I was totally blown away at the gentle ease at which this glider rose into the air. So much so, that I openly had time for a conversation with the glider over my head before taking off!

Having experienced such an easy launch in considerably blustery conditions, I was eager to push this glider to its limits. I flew the Trango XC3 (S) at mid-range weight of 74kg all-up, which possibly for the alps and stronger conditions was a little on the light side and perhaps I could have opted for an extra 5kg for a better penetration on the into wind legs.

UP have outlined the impressive stability at speed. I confirm that when using the bar, transitions were smooth with little or no resistance. The glider “hunkers down” to feel compact, tight and incredibly pitch stable, even in rough air where only a small amount of brake input is required to dampen movements generated by turbulence.

On full bar, one can feel and hear the rush of air as the glider reaches maximum speed, reaching an impressive 59km/hr. However, I found it performed best at just over half-bar, where it maintains its maximum glide performance and sink rate. In much lighter conditions and weak bubbles of lift, the XC3 goes into thermal search mode using a little brake input, remaining buoyant and drifting effortlessly with little height loss.

The brakes of the XC3 have been designed so that a small amount of input will cause the glider to turn with smooth precision in a gentle movement. Using a little more outside brake to slow the tips down together with weight shift enables the glider to turn flatter. Pulling more brake and greater weight shift makes the wing more agile and enables it to turn tight. There is no lag at the wing tips and the pilot can really bank up the glider at an angle in strong thermals. The reverse has to be said is equally impressive when using 360’s for rapid descent, and caution should be taken when engaging in this manoeuvre, as with only slightly more brake and weight shift, the glider almost immediately turns to spiral with an initial descent of -8m/s and a lot more to go!
Application is also needed when practicing wingovers. Because of the XC3’s agility, it is easy to obtain an extremely high bank angle in just a few turns.

The Trango XC3 is easy to land with the usual feedback through the risers communicating any movements from the canopy. The glide and ground effect are easy to monitor and flaring with both brakes need not be applied until a metre off the ground, making precision landings very achievable.

UP has most definitely come up trumps with the Trango XC3. Obviously as with all high performance wings of this class, adequate piloting skills are required in order to get the best from the glider. For enthusiastic cross-country pilots, or even confirmed competition pilots looking for a step down in certification, the Trango XC3 is a good starting point. This means to say that the Trango XC3 is a glider destined for the experienced cross-country pilots and is classed as a “hot C”, which is kind of to be expected from a wing with an aspect ration of 6.9.

for ROCK THE OUTDOOR

– see a video about the Trango XC 3