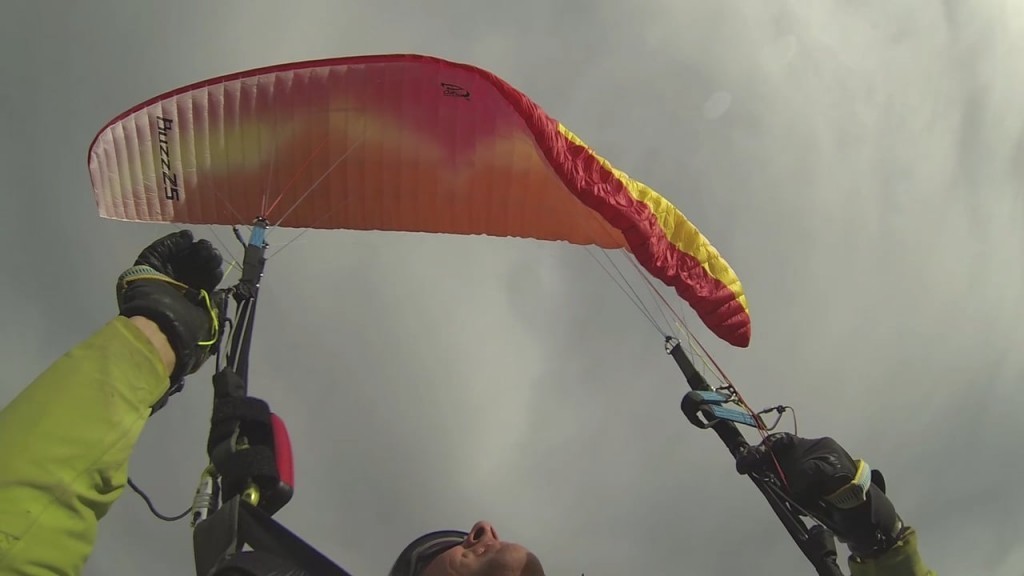 On their website, Ozone say it has been a challenging task improving on the Buzz Z4, but by introducing the latest technology Ozone “consider the Buzz Z5 to be the ultimate compromise between performance, comfort and solidity”. Stéphane Henry from French flying school, Haut Les Mains, puts the Buzz Z5 to the test. Find out what he had to say and watch some of the video footage taken during some of his flights.

Needless to say Ozone have little to prove when it comes to selling a finished product – the glider’s top surface looks outstanding. With some gente pressure on the front risers, bringing up the wing on the A’s is effortless, the canopy comes up cleanly and easily and with slight pressure from the brakes, sits into wind.  I turn keeping the wing above me, feet still on the ground, playing with the sail and feeling the tension in the lines, then two steps and I am away…

First thermal of the day jagged at the edges but which I join easily, the precision of the wing in thermic air is as sharp as a surgeon’s scalpel! Pressure applied on the controls is gentle and progressive.  Leaving the thermal the Z5 is stable on its pitch control and moving towards the manoeuvring zone I pull several asymetrics at normal speed and accelerated – the reopening is smooth without any pilot however the accelerated deflation necessitates a small amount of light pressure on each stab to release the tips.

When entering a 360° spiral the wing transitions easily so the pilot finds himself facing downwards quickly, and an assertive input using the opposite brake eases the wing out of the turn almost immediately with minimal pitch to dampen through pilot input.  I try again this time using the rapid exit technique and counter brake the glider with ease to dampen the roll with smooth precision.

This wing has all the improvements of its big sisters: Delta, Mantra, Enzo, and none of the fine details have been forgotton, the Buzz Z5 has by far all the best elements incorporated : improved shark nose, new leading edge shaping.
This is a flying machine which will surprise more than a few by its simplicity and easy handling in each phase, but also by its impressive performance thanks to the latest-generation technology.
The Buzz Z5 represents the mid-to high end of the EN-B category, offering the pilot high levels of stability, glide, performance.  Passive safety has not been overlooked and the new Buzz Z5 has a profile of 5.16 compared to the Buzz Z4 which was 5.15, so almost no change there.  The certification tests carried out at Air Turquoise showed only two “B” grades : recovery of the wing from accellerated collapse, and on the reopening of the canopy from Big Ears which required some pilot iput.

Once the glider is laid out the prominent shark-nose leading edge is immediately noticeable ; so is easy untangling of the three sets of lines on each side, despite the narrow “conical” pattern made from the split lines for a glider of this category. Usually you would see thicker lines used for an EN-B but the trend these days is to use the finer sort therefore reducing drag.  I hook up my accelerator, actionned by ball-bearing pulleys, which allows the “on-off” action to be smooth and precise.

Reverse or forward launch, nil wind or strong thermic conditions, the Buzz Z5 comes up progressively and slows obediantly before reaching its zenith, making the launch phase controlled and precise. In a stronger breaze the Z5 is not snatchy and the launch phase is very stable with little or no sideways movement of the canopy which faces its courseline.  The Z5 est precise with easy handling and is simple in this particularly meticulous take-of phase, and is just as agile using the reverse or forward launch technique.

Fun and pleasurable to fly

Ozone’s Buzz Z5 gives the pilot the smooth sensation of true gliding, only previously felt flying the higher end wings – the glide on the Buzz Z5 is nothing short of amazing!

The forward speed is good for its category: using the first level of bar an additionnal 8km was noticeable without much loss of performance, on the second rung a further 9km of speed was obtained and one can feel the wing really solidify.  There is a wide speed range on the Z5  and thanks to the shark nose the glider transitions smoothly from low to high in a progressive stages without the plunging or rearing effect.

Pressure on the controls is gentle during the first third of travel then becomes much harder until the glider finally drops back which itself is unexpectedly prominent. However if one persists past the highest pressure point, the wing drops back initially with deflated tips to form a horseshoe enabling the pilot to hold the stall to avoid a cravatte. During the backslide, the Z5 is demanding on the controls, however, releasing the wing is passive and carried out in one firm gesture, ensuring it’s shallow forward dive.

Agile and intuitive the Buzz Z5 communicates movement in a way which is easy f to understand.  The precise handling and agility of the wing means the glider turns with ease, either banked up or in a flat turn the movement is smooth and instinctive using input from the outside brake.  Being able to slow the glider down in the turn enables the pilot to maximise the thermal and climb with precision where finding the core becomes second nature.

The Buzz Z5 moves perfectly on its axe which outlining its symmetrical sensitivity to body input and the capacity to make big wingovers in only just a few movements. With active piloting the wing is generous.  The parachutal stall becomes stable after arms are fully locked in position.  In a 360° the wing moves progressively but assertively into the turn, on hands-up the glider returns to normal flight and becomes stable without further input. Rapid Exit needs is clean and dynamic with pilot input, weight countering and the “tempo” phase with the brakes is a formality as the wing returns to its axe due to its pitch and roll stability. SAT’s are simple and with one wrap of the brake the wing progressively shifts its rotational axe.  The Buzz Z5 is fun and playful and offers pilots enough energy and resources for an EN-B of its category.

If OZONE’s Buzz Z5 sits comfortably in the cross-country performance category, and that is not all. Agility and easy handling are other key features not to be ignored, enabling pilots of any levels to enjoy its playful aptitude for executing basic manoeuvres outside the XC arena.  Generous and responsive the Buzz Z5 is a versatile glider of its class.

Its accuracy and wide speed range allow precision handling with significant safety margins when launching and flairing on approach. The glider is easy to flair and its reactions are well balanced even when deep brake inputs are used to bring the glider down swiftly.

The OZONE Buzz Z5 is suitable for a wide range of pilots from talented beginners to the most experienced of cross-country enthusiasts.  It is an ideal choice for those pilots searching for a wing with high levels of passive safety and comfort in the EN-B class.

In my humble opinion, it’s the first time that the OZONE wizards have made a performance wing, which is both practical and accessible to all.  The Z5 is to flying what the parabolic ski is to the piste: accessible, performance orientated and an all-rounder.

A high performer for thermic and distance with a high degree of passive safety.  The “100km’s” is largely achievable with this wing and only remains to be flown…and spread the word. Its all-round efficiency will seduce a large number of pilots whether flying in active, or more passive air. Even pilots looking for some freestyle fun with be kept happy.  If you are in search of a wing in this category, be sure not to pass this one by – take it for a test fly and you will not be disappointed.